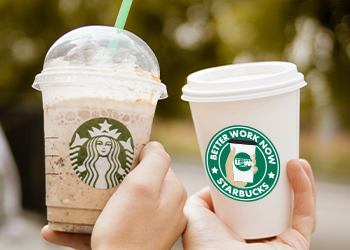 The United Steelworkers union (USW) Local 1-207 has applied with the Alberta Labour Relations Board (ALRB) for a certification vote on behalf of Starbucks workers at the Lethbridge West Starbucks store.

“Despite the barriers that Starbucks and the UCP government have put in the way of workers trying to join a union, the baristas at the Lethbridge West Starbucks store have been persistent in their effort to achieve better working conditions,” said Pablo Guerra, a USW organizer for Western Canada.

“I’m very proud of these workers for holding the line and not backing down after their first unionization vote. It’s been a long road to get here today, but I am confident these workers will finally have a union that will work for them. This application sends a clear message to Starbucks management that it’s time to listen to their workers and involve them in decision-making processes that impact workers and their livelihoods,” added Guerra.

The ALRB will hear objections from Starbucks, which are due by Nov. 15, 2022, and is expected to authorize an in-person vote of the workers shortly after. To win the vote, the union must receive the support of more than half the workers.

The USW represents Starbucks workers at stores in Sherwood Park and Calgary in Alberta, and Victoria, Surrey and Langley in British Columbia. The USW also represents 225,000 members in nearly every economic sector across Canada and is the largest private-sector union in North America, with 850,000 members in Canada, the United States and the Caribbean.

Workers interested in joining the United Steelworkers union can learn more about the benefits at betterworknow.ca.