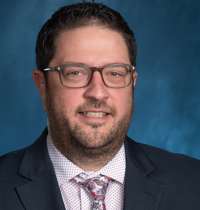 Dominic Lemieux became the United Steelworkers’ District 5 (Quebec) Director in April 2020, after serving as Assistant to Director Alain Croteau since 2016. He previously worked as the union’s North Shore Regional Co-ordinator. He is also a Vice President of the Quebec Labour Federation (FTQ) and a member of the Board of Directors of the FTQ’s Solidarity Fund.

Following his studies in mining, he began his career in the Abitibi gold mines and then returned to work at Stelco (now ArcelorMittal) in Contrecoeur. He quickly developed an interest in workplace health and safety and became an activist on the USW Local 6951 Executive. This led to his appointment as a USW Staff Representative in 2008.

Dominic travelled throughout Quebec as a member of the Steelworkers’ organizing team. He also has led major negotiations with multinationals such as Rio Tinto, Alcoa, Lafarge, ArcelorMittal, Glencore and many others.

Dominic holds a certificate in health and safety from the University of Montreal and completed the Harvard University Trade Union Program.

He chaired the FTQ Youth Committee from 2007 to 2009 and played a key role in a determined campaign that led to a ban in 2018 on two-tier pension and benefit plans in Quebec workplaces.

District 5 is headquartered in Montréal, Québec.