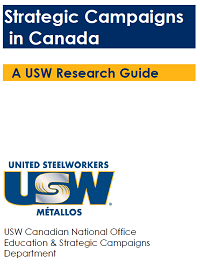 It is becoming more difficult to protect the wages, benefits and working conditions of USW members in Canada through work stoppages alone. Employers are getting larger and more powerful, have an enhanced ability to withstand work stoppages, and are becoming more aggressive. While some may point to a decline in strikes in Canada as an indication that labour relations have become more stable, others point out that the decline in strikes may be attributed to a realization that unions are less likely to strike because the employers have the upper hand and a strike may not be effective.

At the same time, employers are aggressively using lockouts to force workers to accept unjust demands. In a lockout or strike, especially when scabs are used, developing a strategic campaign may be essential to defend workers and support the union.

Employer use of anti-union law firms and replacement workers, and anti-worker actions by federal and provincial governments are creating a fundamental inequality in traditional labour relations and give employers more power. Globalization has meant that employers are diversified and can rely on revenue generated from other resources outside Canada when a labour dispute occurs.

One key to correct this imbalance starts with information. With information, we can better understand what we are up against and develop strategic campaigns to leverage our power against employers on a more equal level. Research involves the collection, analysis and dissemination of information. It allows us to develop strategic campaigns that identify an employer’s strengths and weaknesses while assessing our own bargaining power and our ability to confront an employer. Strategic campaigns can be ramped up before a strike or lockout occurs, but are most often utilized after the union or the employer has taken action. However, preparation before a strike or lockout is critical.

When developing a strategic campaign, the union needs to know how the employer is structured, how it makes decisions, and how it makes its profits.

Smaller companies may appear to present a simple and clear situation. But they also may be privately owned, and make very little information publicly available. Conversely, the situation may seem overwhelming when dealing with large corporations with complex business models involving multiple product lines sold on an open market, hundreds of locations, thousands of shareholders, and often several distinct businesses or divisions under the umbrella corporation. In those cases, the abundance of information publicly available can also make strategy development more challenging.

This guide will get you started in thinking about an employer’s source of profits, the relationships an employer depends on, how to develop a strategic campaign, and most importantly where to find the necessary information that can improve your bargaining position.