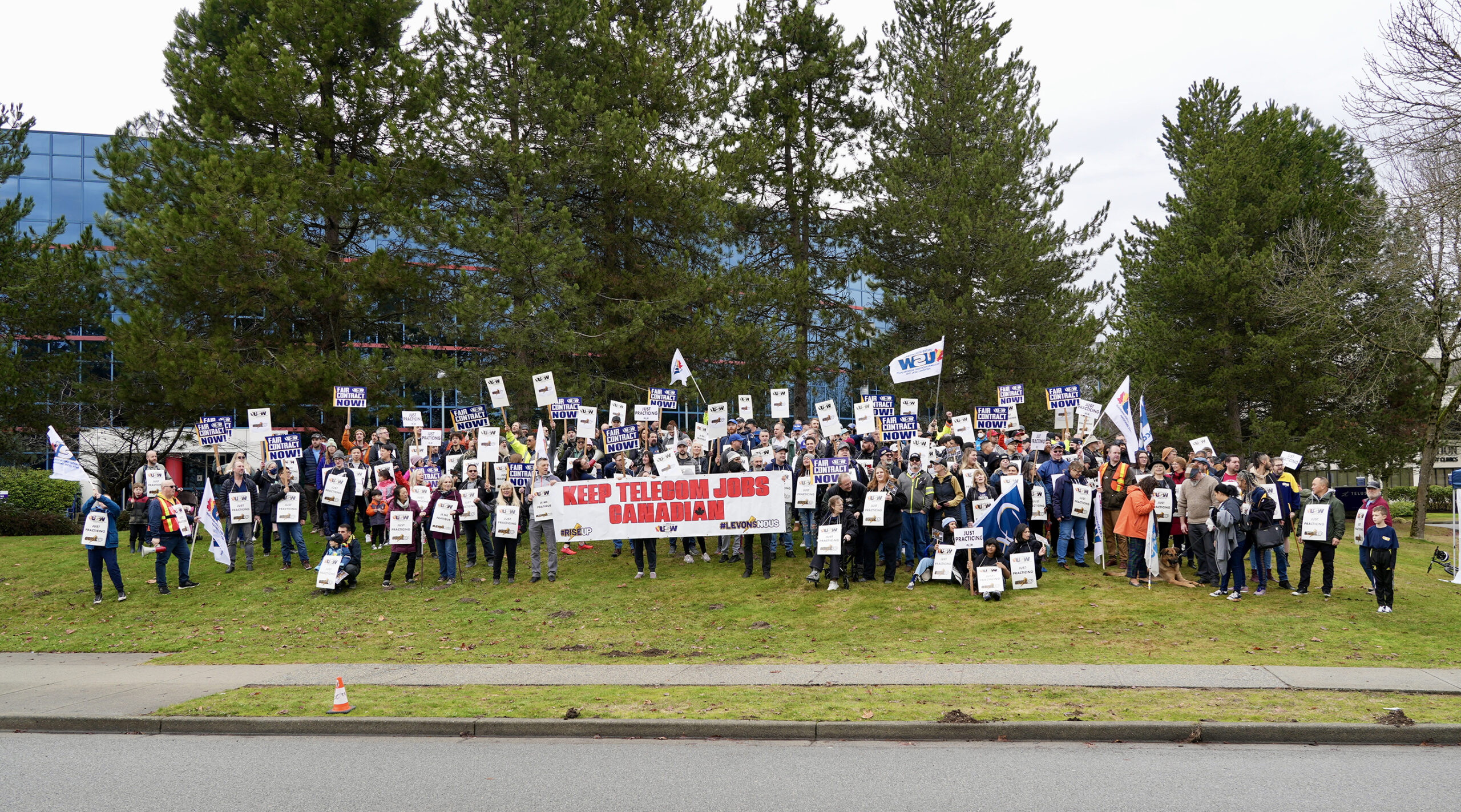 BURNABY, B.C. – On Sunday, Jan. 15, hundreds of Telus workers, members of the United Steelworkers union (USW), gathered outside the Telus Mobility building in Burnaby and other Telus locations across Canada for a solidarity rally and picket training in preparation for potential escalating job action.

The workers have been bargaining with Telus for over 14 months and have not reached a tentative agreement supported by the union.

“Telus will not move off massive and unnecessary concessions they brought to the table,” said Donna Hokiro, USW Local 1944 President. “After months of bargaining, we tried to reach a deal through the federal conciliation process, but before Christmas, Telus made a unilateral decision to halt bargaining and walked away from the table.”

During federal conciliation, the union’s bargaining committee presented Telus with a revised offer that showed a willingness to work with the company on many of its key issues. Telus rejected the proposal and chose to take their offer directly to the membership for ratification.

“It’s absurd that Telus has chosen to go directly to the membership bypassing our bargaining committee. What Telus is presenting is not a fair, just or equitable deal, and our members are worth and deserve more than this offer. We are recommending our members vote ‘no’ to this unfair offer that goes against and undermines the collective bargaining process,” said Hokiro.

“I am very disappointed with Telus and the lack of respect they are showing for their unionized workforce,” said Scott Lunny, USW Director for Western Canada. “I don’t know how Telus thinks it’s okay to make record profits and then turn around and say to our members that they only deserve a 0% wage increase in the first year of the contract. Telus can well afford to invest in its Canadian workforce, as we see so many other companies doing.”

USW Local 1944 is holding a series of town hall meetings with its membership to ensure members are fully aware of details of the sub-par offer from Telus. At these meetings, members will vote on the offer, which is not being recommended for acceptance.

“I am proud of the resilience shown by our members throughout this frustrating process. They are rising up and fighting back. This is not a time for concessions. USW members are standing up to protect and improve their jobs and make sure that there continue to be good, family-supporting telecom jobs here in Canada into the future,” said Lunny.

“Our union of more than 225,000 members across Canada stands in full support of our Telus members and we are there with them every step of this fight. The USW’s Strike and Defence Fund is ready to support our members financially should escalating job action result in a strike or lockout. If Telus is looking for a fight, we are ready for it,” added Lunny.

The USW represents 225,000 members in nearly every economic sector across Canada and is the largest private-sector union in North America, with 850,000 members in Canada, the United States and the Caribbean.

Watch USW Local 1944 President Donna Hokiro, USW District 3 Director Scott Lunny and BC Federation of Labour President Sussanne Skidmore share their solidarity in support of thousands of TELUS workers across Canada here and check out photos from solidarity actions across the country here.